As an undergraduate in the laboratory of Professor Richard R. Schrock, I was introduced to organometallic chemistry, catalysis, and polymer chemistry. My projects involved the synthesis and characterization of Group IV, V, and VI complexes using a variety of ligands. A molybdenum compound containing the tris(perfluorophenyl)triamidoamine (TREN) ligand is shown below. 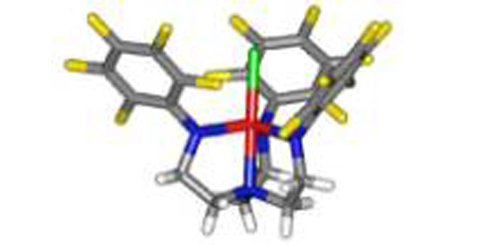 My interest in catalysis and polymer chemistry continued through my doctoral studies with Professor Robert M. Waymouth. One project in the Waymouth group is the synthesis of elastomeric polypropylene using unbridged zirconocenes. It is known that the properties of polypropylene (PP) is dependent upon the stereochemistry of the methyl groups along the polymer chain; for instance, if all methyl groups are on the same side of the polymer chain, the material is crystalline (isotactic). If the methyl groups are stereo-randomly distributed, the material is amorphous (atactic).

An elastomeric, rubbery PP can be formed from polymer chains containing both isotactic and atactic segments. Such a polymer chain could be formed from a metallocene catalyst that is capable of switching conformations during the time it takes to synthesize a single polymer chain. One such catalyst that may be operating by this mechanism is (2-phenylindenyl) zirconocene (see below). My research focused upon the activity of these catalysts and aspects of the polymerization mechanism. 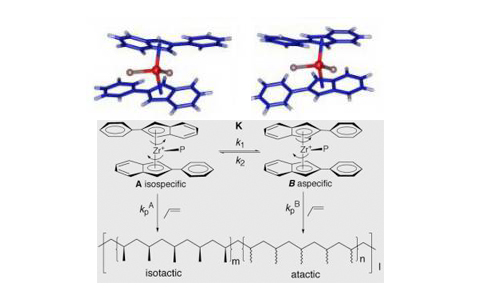 My postdoctoral experience with Professor Julius Rebek, Jr. involved supramolecular chemistry, a field that utilizes molecular recognition and self-assembly. We examined the properties of a reversibly-formed cylindrical capsule held together by hydrogen bonds. This capsule was a host for smaller guest molecules and the mechanism of guest exchange was studied. The figure below shows the cylindrical capsule enclosing one molecule of benzene and one molecule of p-xylene.  Benzene exchange may occur through opening of two or more walls of the capsule. 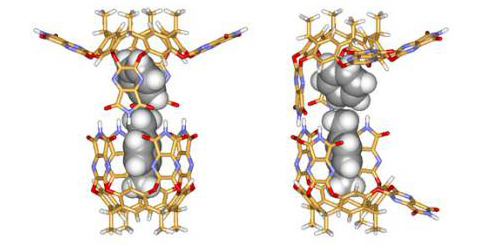