My fundamental interests relate to the technology advancement of small satellites. Below are list of CubeSat satellite projects that are directly related to my techonology development research.

The long term vision of the Naval Academy Team for Autonomous Robotics (NSTAR) is to lower both the risk and cost of on-orbit space system construction and repair through the use of a CubeSat robotic arm system. Robotic Experimental Construction Satellite (RECS) is currently the second iteration of NSTAR and is a 3U CubeSat with two extendable robotic arms, each with six degrees of freedom. RECS is designed and developed for integration aboard the ISS, where it will undergo a series of tests designed to establish initial autonomous operation capabilities. RECS is scheduled for launch in the spring of 2021 and is the next step in providing the space industry with a small, adaptable solution to on-orbit construction and repair.

TugSat is a 3U (10 x 10 x 33 cm) CubeSat with 14 Magnetically Enhanced Micro-Cathode Vacuum Arc Thrusters (µCAT). The mission of TugSat is to assist other Naval Academy satellites with scientific experiments or satellite servicing missions by acting as a substitute for an attitude/orbit control system. This allows the host satellite programs to design for more volume, mass, and power for their scientific experiments, since a traditional attitude control system would not be necessary to complete their missions. TugSat will be equipped with a suite of equipment, including a navigation system payload to provide data for development of rendezvous software, and a docking system capable of mating with another 3U CubeSat. In order to provide this functionality, TugSat must first demonstrate its capabilities in orbit while mated to another 3U CubeSat. TugSat shall be launched while mated alongside a host 3U CubeSat and deployed into orbit as a single 6U unit (10 x 20 x 33 cm). For its initial mission, TugSat will remain tethered to the host spacecraft throughout the duration of the mission.

RSAT (USNA-19) is the first USNA Amateur Robotics mission that will carry two remote manipulator arms for robotic investigations and manipulation in space.  The 3D-printed robotic arms have 7 degree-of-freedom each, and have the wing span of 1.5 m. RSat has a CMOS camera attached at the center of the body to monitor the accuracy of the arm movements. Each end effector also have a camera, enabling the satellite to provide on-demand diagnostic pictures of itself. It was launched on NASA ELaNa XIX mission in December of 2018.

-2 (USNA-15) –  is a 1.5U Amateur CubeSat with thrusters from G.W. University to experiment with attitude control. These thrusters are next-generation electric propulsion thrusters that use solid Nickel as propellant. It is manifested with PSAT-2 on the STP-2 launch, and made it into space in June 2019.

BRICSat-1 is a 1.5U CubeSat with thrusters from GW University to experiment with attitude control. BRICSat-1 is equipped with 4 thrusters that are designed to perform 1) detumbling maneuver, and 2) experimental spin-up/spin-down demonstration. These thrusters are next-gen, new thrusters that have not been tested in space. BRICSat-1 provided the first on-orbit demonstration for these micro-cathode electrical propulsion system. It also supports am Amateur Radio PSK31 multi-user text-messaging transponder providing global text-messaging coverage.  See http://aprs.org/psat.html. It launched on the ULTRA mission in the spring 2015. 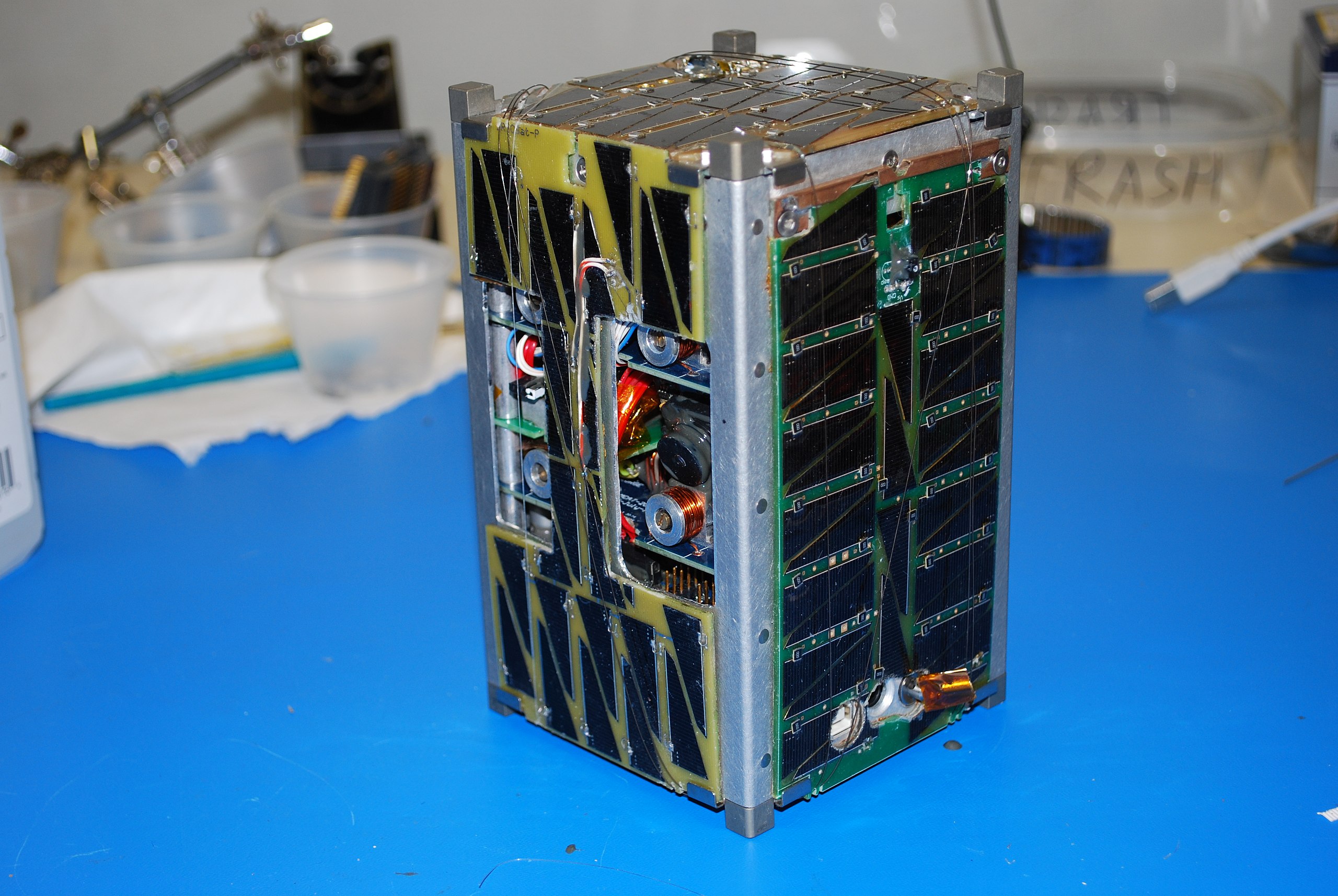 USS Langley is a 3U Colony-1 CubeSat designed to provide a Linux based file server in space operating on S-band. The main goal is to demonstrate on-orbit internet server capability for potential future internet server provider constellation of satellites. The vision was to have hundreds of these satellites in space to provide around-the-globe internet service. It launched on the ULTRA mission in the spring 2015.

DragonSat-1 is the first CubeSat developed by the Naval Academy. This 1U CubeSat contains a 1.5 m long gravity-gradient boom with 60 g tip-mass for passive stabilization. DragonSat-1 utilizes low-cost TASC solar cells with surface encapsulant as "cover glass". It launched on the NASA ELaNa IV mission in NOV 2013.