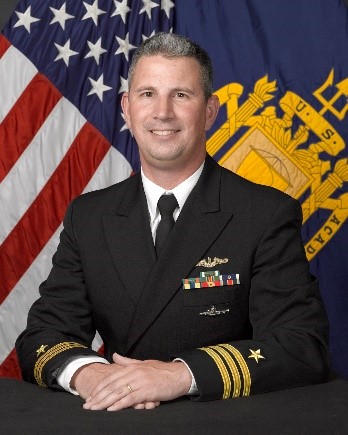 CAPT Kevin Mullaney is an Army brat born in Huntsville, AL and raised in Colonial Heights, VA. He graduated with a B.A. in English from the University of Notre Dame in 1994 and received his commission through the Navy ROTC program.

After completing nuclear engineering training at the Navy Nuclear Power Training Unit in Orlando, FL and qualifying as a nuclear plant watch officer at Navy Nuclear Power Training Command in Charleston, SC, he reported aboard the USS MARYLAND (SSBN 738)(BLUE),  where he served as the Electrical Division Officer, Main Propulsion Assistant, Damage Control Assistant, and Tactical Systems Officer. Following his Division Officer tour, he served as an English Instructor at the Naval Academy Preparatory School in Newport, RI.  While on shore tour, he completed a Master degree in English with a concentration in Rhetoric at the University of Rhode Island.

CAPT Mullaney next completed two Department Head tours, first aboard the USS ALEXANDRIA (SSN 757) as the Navigator, executing a Depot Modernization Period in the Portsmouth Naval Shipyard in Portsmouth, NH., and then as the Weapons Officer on the USS HELENA (SSN 725) in San Diego, CA, where he completed two Western Pacific Deployments.  Following his Department Head tours, he reported to Commander, Submarine Force in Norfolk, VA where he served as the Future Capabilities, Experimentation, and War Gaming Officer (N821).  CAPT Mullaney next reported onboard USS SANTA FE (SSN 763) as the Executive Officer, completing post overhaul certification and sea trials in Portsmouth, NH and a home port shift to Pearl Harbor, HI.

In 2009, CAPT Mullaney was selected as a Permanent Military Professor and completed his M.A. and Ph.D. in Industrial/Organizational Psychology at the University of Illinois Urbana/Champaign.  In 2013, he reported to the United States Naval Academy in Annapolis, MD, where he has served as the Leadership, Ethics, and Law department chair and course director for two of the four leadership core courses.  He is currently serving as the Course Director and curriculum architect for the Plebe leadership course.  His teaching and research interests include the structure of personality, decision making, and moral psychology.